Festival judges never cease to surprise me. Just when I think I might have figured out what kinds of images they like and don't like, they reverse course on me by 180 degrees and pick something I'd almost given up on.

Case in point: When I submitted photos to Dirty Show 23 (AKA Dirty Detroit), I thought I had a couple of real winners in the erotic art category, from an excellent studio session with Gin & Ginger that included a couple of really cool high concept bondage scenes. I almost sent three photos from that one session, but then, at the last minute, thought well.... maybe I should include something different, just in case. I went with "Flight," an urban nude featuring Abi Blue last year in downtown Seattle, a photo I personally really love but which I had guessed would be less interesting to the Detroit judges. 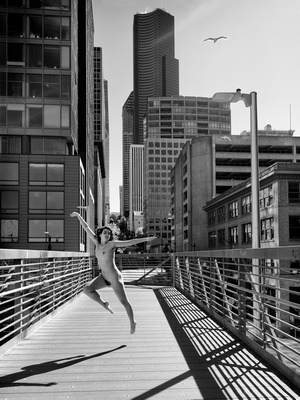 Guess which one got picked?

Yup, "Flight." The other two were passed over, cool concepts and all.

I guess the lesson here is to submit as wide a range of possible themes and styles as possible, since you never know what the judges will be looking for.

And maybe--just speculating--the reason this photo got picked might be because everyone else was submitting high concept studio photos, and they wanted some diversity in their choice of images.

Regardless, I'm thrilled to be part of the show, and thrilled that this image, which I am so proud of, will be featured! I've already ordered a framed and matted print to forward on to the Festival. Maybe I'll even get lucky and it'll sell!

Meanwhile, in other good news, I'll be adding another nation to my list of exhibitions. Yes, one of my submissions was accepted at the Glasgow Gallery of Photography, for their International Monochrome exhibit starting January 6, 2023! Unfortunately, the rules of the exhibition prohibit me from announcing which photo it is until the exhibit begins, so watch for that announcement in about a month. Suffice it to say that I'm pleased with the selection and, again, wish that my travel budget was no object, so that I could see it in person, and do some photo shoots in the magnificent landscapes of Scotland!