Ronin-: The Lady of the Lake Preview

If you were paying attention in yesterday's blog post, you caught that I had two great photoshoots over my weekend last week. The second was with Ronin-, at Eunice Lake and Tolmie Peak in Mount Rainier National Park.

This was a photoshoot we've been planning for a long time! It took a while for all of the logistics to come together, and we were so fortunate that when it did, it was on an absolutely gorgeous day. And like the shoot with Haily and Lily, this one with Ronin- and their boyfriend not only resulted in fantastic images, but also new friendships with like-minded people.

We met at Wally's Drive-in in Buckley, then drove up to the remote trailhead along Mowich Lake. I've never seen so many cars at that trailhead on a weekday! We spent an hour and a half hiking up to Eunice Lake, sharing stories and getting to know each other, learning how much we had in common. Ronin- was looking forward to this photoshoot because they had done some modeling in the past, but then had been in an abusive and controlling relationship in which they had been gaslighted to think of themself as ugly, fat and weak rather than the beautiful, fit and muscular young person they actually are. The ex-boyfriend had prohibited Ronin- from modeling. This expedition was a return to form, in a new location and with a new and supportive boyfriend by their side. 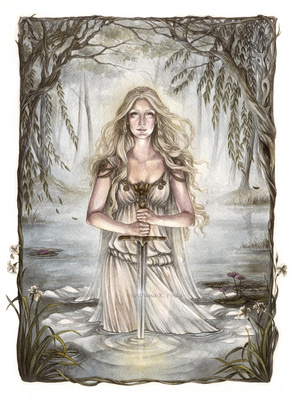 The Lady of the Lake by Achen089

And Ronin- had very specific and creative ideas about what they wanted to do! This was to be a "Lady of the Lake" photoshoot, their take on a classic theme in art and mythology. They had managed to find a beautiful sword, originally made for the Knights of Columbus and intricately etched, with a classic cross-shaped handle. They also had a magnificent hand-made tiara studded with crystals, a flowing white dress, and for good measure, a dozen roses. We had a lot of fun making up stories to tell other hikers who asked about the roses! "I'm taking them to my girlfriend at Tolmie Peak." "We're having a wedding." I suggested we say we were attending a wake and viewing!

By the time we got to Eunice Lake, we were hot enough that jumping in the lake for a swim was enormously tempting! Plus, the mosquitoes were fierce, so getting out in the open water was advantageous. The three of us swam for maybe twenty minutes or so. I wonder how much the hikers at Tolmie Peak Fire Lookout could see, from so far above us?

Over the course of the afternoon and evening, we saw numerous groups swimming in the lake... I can think of at least six other groups besides ourselves. We were the only ones to skinny dip. I totally get that people have the right to make their own choices. But -- speaking solely for myself -- it always amazes me how deeply ingrained Americans' resistance to nudity is. So many people climb into the water in the clothes, or their underwear, enduring clammy wet clothing rather than enjoying nature in the most natural way. Again, personal choice! But based on my own experience, I truly believe that 90% of people would be astonished by how pleasurable and freeing it is to swim naked, if they'd only try it once.

Anway... we wanted to do our photoshoot in the low-angle light of evening, so to pass some time we hiked on up to Tolmie Peak and spent half an hour up there, enjoying the view and chatting with other hikers. Ronin- suggested that while we were there, we might do a few photos before we headed back down to the lake, so Ronin- changed into a dress and I shot some great images there on the ridge.

By the time we got back to the lakeshore, the light was perfect. We shot images in the white dress, in the nude, and then in the dress in the water, with the sword. As the evening progressed, and we figured out the logistics of the photoshoot, the photos got better and better. The Lady of the Lake theme was a HUGE success, and so was the goal of recovering Ronin-'s sense of empowerment. I mean, look at these photos. Have you ever seen such a beautiful and powerful individual?

(Note: Ronin-'s face is blurred at their request... they will decide which photos to make public, and to what degree, after the images are fully edited.)

The only fly in the ointment (pun intended) of a perfect day was how bad the mosquitoes were. Fierce. Relentless. Those of us not in the water used copious bug spray, but it only helped so far. We'd have probably photographed later into the evening, in fact, if the mosquitoes weren't so bad. But except for this one factor, this was, for the second day in a row, a perfect day. 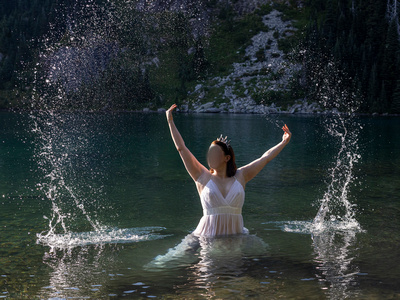 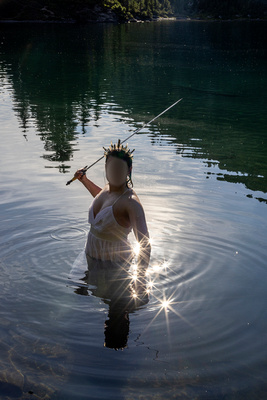 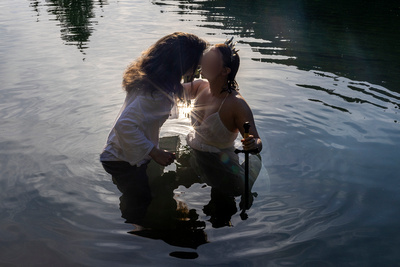 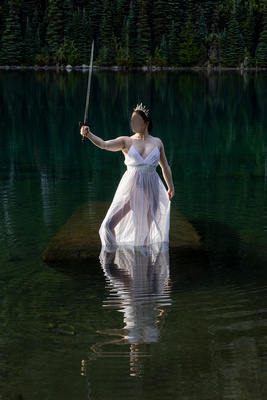 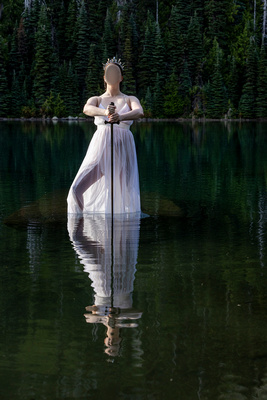 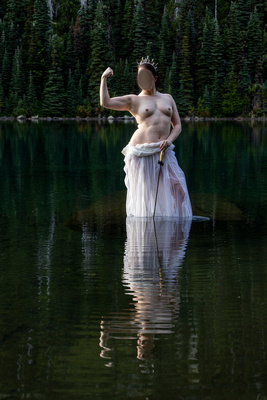 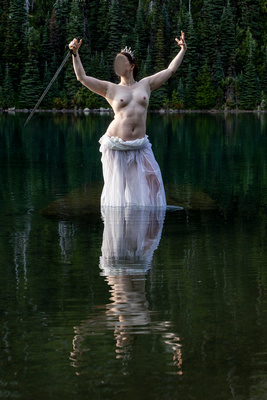 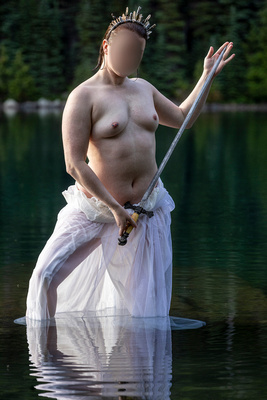 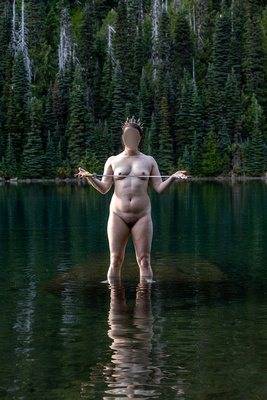 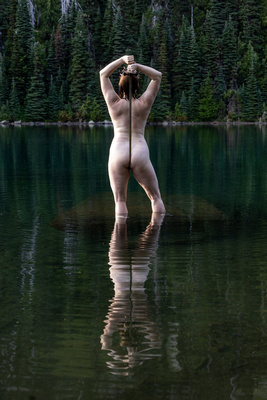