Thank you for your patience while we retrieve your images.

The emergence of abstract thought led to not only art but also language and culture. Culture allowed complex social structures to arise, based not merely on tangible, immediate experience, but also on theoretical ideas like morality, religion, tradition, and superstition. Thus decisions could be made based on what was "good" or "bad," "appropriate" or "inappropriate," separately from whether the decision would lead to physical harm or pleasure. These two kinds of criteria might overlap, but often the reasons behind something being "good" or "bad" were complex, based on long-forgotten reasoning, or based on consequences for the community rather than the individual.

In fact, as cultures diverged and spread across time and the planet, they reached different conclusions about what was "right" and what was "wrong." On some matters, there was broad consensus: incest and murder are wrong, honesty and justice are good. But even here there was disagreement. Is it incest to marry your first cousin? Under what conditions is killing not "murder" but justified? Can you tell a lie in service of a greater truth? Does justice apply equally to everyone, or, as in the un-amended U.S. Constitution, are some afforded only three-fifths the representation of others? (We like to think, at least, that these definitions of morality are improving over time.)

Keeping track of what is appropriate, and where, can be maddeningly difficult, and a source of endless debate. Attempts to articulate what is and is not acceptable have limited success -- while most people agree on the extremes, a vast area in the middle is impossible to pin down, with some self-designated experts resorting to saying of what is inappropriate, "I know it when I see it." Even the Supreme Court has resorted to referencing "community standards," acknowledging that these vary by time and place. Many of our cultural wars over obscenity are currently being fought on social media, with artists on one side and content moderators on the other (often dubiously assisted by artificial intelligence). Thus nakedness is taboo, except for "photos of post-mastectomy scarring and women actively breastfeeding." (The question of why women's bare breasts fall under the definition of nudity, but not men's, is not addressed by Instagram's Community Guidelines.) Also, "nudity in photos of paintings and sculptures is OK, too," implying that nudity in art is only acceptable if there is plausible deniability that it was created from the imagination rather than by faithfully capturing something that the artist actually observed, as with the click of a camera shutter.

Which brings us, finally, to the impassioned debate over art versus pornography. By some definitions, "pornography" is art that "appeals to the prurient interest" -- that is, which is intended to cause sexual arousal. Many would say that by definition such art isn't even "art" at all, and that there can be no overlap between the terms. But difficulties arise when there is disagreement between the intent of the artist and the perception of the viewer. Thus Instagram says that photos of bared breasts are acceptable when associated with breastfeeding (a context that is culturally considered inappropriate to be perceived as sexual), but inappropriate when the photo is of a woman merely relaxing on a beach, even when the context and intent of the photographer are clearly non-sexual. The same inconsistency means that nudity in general in paintings and sculpture is assumed by Instagram to be non-sexual, even when it obviously is, while nudity in photography is assumed to be sexual, even when it obviously isn't.

As for me? I see art as a means of interpreting human experience. What does it mean to be alive? What do we share in common with all of humanity, and what is unique about our individual experience? As such, I find it absurd to say that all of human experience is open to interpretation through art -- birth, death, loss, joy, suffering, love, family, work, all of it from the mundane to the profound -- except for sexuality, especially when our sexual identities and experiences are so fundamental to who we are. With rare exceptions, we are sexual beings. Without exceptions, we have bodies, bodies that feel and grow and change and bring us both ecstasy and pain. That universality is what, for me, makes the human figure so meaningful as a subject of art. A nude image may mean different things to different people, depending on their cultural background. Some may find it beautiful, while others may have more negative or complex reactions. But not a single person on the planet cannot identify in some way with what it means to have a body, and with that body's relationship to the world around it.

For me, sexuality is no different. We are all sexual beings, and we all have passions and desires. We all interact with others and with the world around us in sensual and sexual ways, and that eroticism is potent raw material for artistic expression. Does that make it "pornography?" By some definitions, yes. But I reject those definitions that say it cannot also be art.

For the purposes of my artistic portfolio, I have reserved as "erotic art" those that most explicitly deal with sexual themes. This includes artistic images of sex itself -- and yes, I do believe that sex can be photographed artistically, just as one might make artistic photos of any other human activity, like sailing or cooking. This also includes images that are overtly sexually provocative, that is, images intended to arouse, or images of individuals being sexually provocative to each other. It does not include images that are merely sensual, images that acknowledge that we are a deeply-feeling species and one in which sexuality is an integrated part of our being. Those images represent a central theme of my art and will always be found in my general portfolio.

In my own vision of Utopia, it wouldn't be necessary to hide these more sexually-oriented images away behind warnings and disclaimers and explanations. But that's mainly because in my Utopia we wouldn't have to hide these parts of our lives so much, either. That could be the subject of a whole different essay. Suffice it to say that I recognize that, for now, most of us don't live in such a Utopia. This separate portfolio specifically for my most "erotic art" is a concession to the culture we actually live in -- and (like all of my art) an artistic statement envisioning a world in which human sexuality, freedom and diversity are celebrated rather than marginalized. 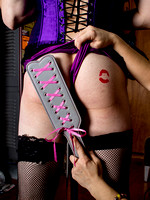